The Myth
Lyme disease is the ‘disease du jour’.

Not true. Lyme is a serious illness and ignoring this endemic issue will lead to more chronic illness with all the emotional and economic costs involved.

THE NEW HYPOTHESIS, A CONNECTION WITH CHRONIC LYME DISEASE

[CanLyme note: The United States Center for Disease Control (CDC) should never be left as the ‘final word’ on anything medical or science related.  They are rife with conflicts of interest with the for profit industry and push agenda’s that have no or very little scientific basis in fact. CanLyme believes much more independent research is needed but so long as tax dollars are repeatedly doled out to a select group of researchers tied to for profit industry there will never be independence of thought and pure unfettered science. As many have said before, it is what we have not discovered because of this profit driven research model that is so disturbing. It is the taxpayers who can insist on change.]

At the time of the CDC report, there were many competing scientific hypotheses for Morgellons. So the CDC were quite right to say that there was no single clear diagnositc criteria to use, or tests.

However, now it seems that the researchers have converged on a single hypothesis. Which seems, scientifically, quite a reasonable one. The Mayo Clinic Page page about Morgellons refers to this group of researchers

There are maybe a dozen or so researchers involved in this research. But one of the main proponents of this hypothesis is Marianne J. Middelveen, MDes, a Veterinary Microbiologist from Alberta, Canada. She made a connection with a disease of cattle, called Bovine Digital dermatitis which has similar symptoms – and in that case, it is well established that there are microfilaments of keratin and collagen which form beneath the skin.

She analysed the filaments that form beneath the skin of sufferers, and found out that these also are made of keratin and collagen.

She also found spirochetes, which are usually associated with Lyme disease in humans.

These get their name because of their spiral shape: 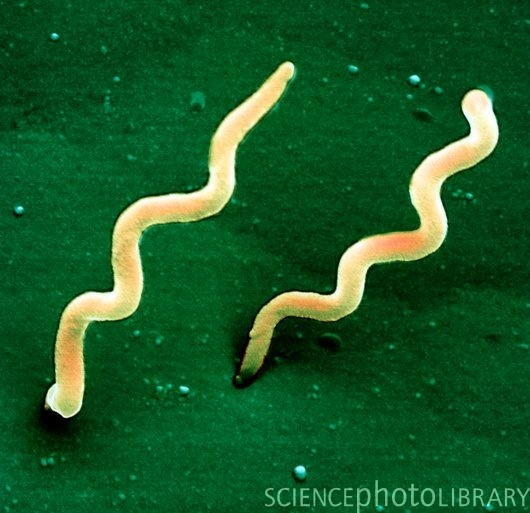 You can listen to her talk about her researches in the One Radio Network morning show with Patrick Timpone here: Marianne Middelveen, Morgellons Disease

It turns out that Borrelia burgdorferi has a preference for infecting fibroblasts and keratinocytes which are cells in your body, in the epithelium, that create keratin and collagen – components of your skin. So they are a part of a healthy skin.

Her hypothesis is that the spirochetes hides from the antibiotics inside the cells that produce these materials and this can influence gene expression (which genes get turned on or off), so something goes wrong with gene regulation, leading to these cells producing too much collagen and keratin, creating these fibres in the skin, which then cause the irritations and sores. They may be able to hide in these cells for many years on end, before something changes and triggers an outbreak of Morgellons.

This connects the hypothesis to another controversial condition, Chronic Lyme Disease. Normally if you get bitten by a tick and you get the characteristic “red bulls eye” rash symptoms of Lyme disease – then you go to the doctor – ideally as soon as possible. You then get a short course of antibiotics, and for most patients, that clears everything up. 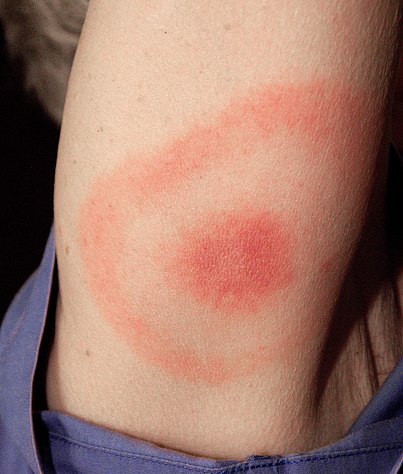 Red “Bulls Eye” rash of Lyme disease. If you get this symptom, see a doctor right away. For most patients a quick course of antibiotics clears it up completely.

But some patients continue to get symptoms for many years afterwards. The suggestion is that the spirochetes can sometimes hide from the antibiotics, and then continue to cause problems long after the disease is normally considered to be cured.

This has the same issue as Morgellons, that the treatment for chronic lyme disease is a long term course of antibiotics. Most medical authorities advise against this method of treating it. See Lyme Disease Controversy (wikipedia)..

The problem here is that though the mechanisms of persistence in Lyme disease are well established in animal studies, dogs mice and rhesus macaques, there is a lot of controversy about whether the same processes happen in humans.

There are two views here, the view of the CDC that humans are different from the animals, and one month of antibiotics will get rid of Lyme disease, and the view of ILADS (the International Lyme and Associated Diseases Society) that persistent lyme disease is a problem.

Marianne Middleveen says she has chronic lyme disease herself (though she doesn’t have the symptoms of Morgellons). As a microbiologist she can culture it in a special growth medium, and (after maybe a month) she can see the Lyme bacterium swimming around, and do DNA studies, and molecular stains and techniques to definitely identify it as Borrelia Burgdorferi (they use antibiotics to eliminate other microbes).

WHY DIDN’T THE CDC FIND THE SPIROCHETES?

In their 2015 paper, Middelveen and her co researchers say that the CDC study had limitations which could explain why they didn’t find the spirochetes

“The search for spirochetal pathogens in that study was limited to Warthin-Starry staining on a small number of tissue samples and commercial two-tiered serological Lyme disease testing as interpreted by the CDC Lyme surveillance criteria. It should be noted that only two of the patients in our study group were positive for Lyme disease based on the CDC Lyme surveillance criteria and yet Borrelia spirochetes were readily detectable in this group of 25 MD patients.”

WHAT ABOUT THE COTTON FIBRES FOUND BY THE CDC?

The authors agree that the cotton fibres extracted by the CDC are unrelated to the disease, and are probably from clothes and swabs. However they say that the fibres they study are a different phenomenon. They are almost microscopic in many people, 10 microns to 40 microns wide. They may require 60 times magnification to be seen clearly, and can be found beneath unbroken skin. The fibres they found were made of keratin and collagen, not cotton. See Exploring the association between Morgellons disease and Lyme disease: identification of Borrelia burgdorferi in Morgellons disease patients,

WHAT ABOUT THE DELUSIONS

Some of the patients do start to get many different ideas about their condition and may think they are infected by insects, or other things.

This is in the earlier papers by other researchers. They agreed with the CDC that these incorrect beliefs can occur, but differ in their understanding of the cause / effect connection. Based on patient reports and observations, they believe that the physical symptoms occur first, and the psychosomatic disorders follow later. Lyme disease is also implicated in neurological conditions so that may also be a factor.